The largest country in South America, Brazil occupies almost half the continent. Nearly all of it is in the Southern Hemisphere and much of it is tropical, with vast stretches of rainforest filled with exotic plants and wildlife. Its 7,400-kilometer Atlantic coast is lined with golden sand beaches, and its interior is filled with mineral resources. Gold from Brazil’s mines still lines the churches of Portugal, the colonial power that ruled Brazil until 1822. This strong Portuguese influence is evident in Brazil’s colonial architecture, in decorative arts such as the glazed tiles in its churches and convents, and in the language. For tourists, Brazil is both a tropical paradise and an exciting cultural destination with attractions for all tastes, from idyllic beach holidays and jungle explorations to world-class art museums and the pulsing rhythms of Rio’s Carnival. 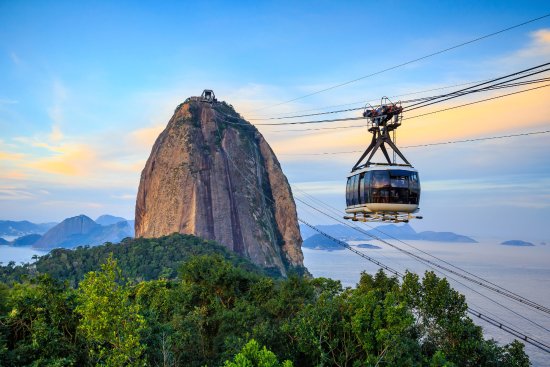 The easily recognized emblem of Rio de Janeiro, the rounded rock peak of Sugar Loaf juts out of a tree-covered promontory, rising 394 meters above the beaches and city. Its summit is one of the first places tourists go, for views of Rio and the harbor, and for the thrill of riding suspended in a cable car between Sugar Loaf and the Morro da Urca, a lower peak from which a second cableway connects to the city. Rio’s first settlement began below these peaks, near the long Praia da Urca beach, and you can tour one of the three early forts there, the star-shaped Fort São João.

With arms outstretched 28 meters, as if to encompass all of humanity, the colossal Art Deco statue of Christ, called Cristo Redentor (Christ the Redeemer), gazes out over Rio de Janeiro and the bay from the summit of Corcovado. The 709-meter height on which it stands is part of the Tijuca National Park, and a rack railway climbs 3.5 kilometers to its top, where a broad plaza surrounds the statue. Completed in 1931, the 30-meter statue was the work of Polish-French sculptor Paul Landowski and Brazilian engineer Heitor da Silva Costa, and is constructed of reinforced concrete and soapstone. The eight-meter base encloses a chapel that is popular for weddings. Although this is one of Brazil’s most readily recognized icons, it is often mistakenly called The Christ of the Andes, confused with the older statue marking the boundary between Argentina and Chile.

A mid-point stop on the railway leads to trails through the Tijuca National Park, a huge forest that protects springs, waterfalls, and a wide variety of tropical birds, butterflies, and plants. Several more viewpoints open out within the park.

Few shows match Rio’s pre-Lenten Carnaval (Carnival) extravaganza for color, sound, action, and exuberance. Make no mistake, this is not just another rowdy street party, but a carefully staged showpiece, where spectators can watch the parades of competing samba dancers from a purpose-built stadium designed by none other than Brazil’s best-known architect, Oscar Niemeyer. Called the Sambódromo, this long series of grandstand boxes provides ringside seats to a 700-meter parade route where dancers and musicians from the competing samba schools strut their stuff in a dazzling explosion of brilliant costumes. If mob scenes are less appealing to you than more spontaneous celebrations (that are equally riotous and colorful), you’ll also find Carnivals in Salvador, Bahia, Recife, and other Brazilian cities. 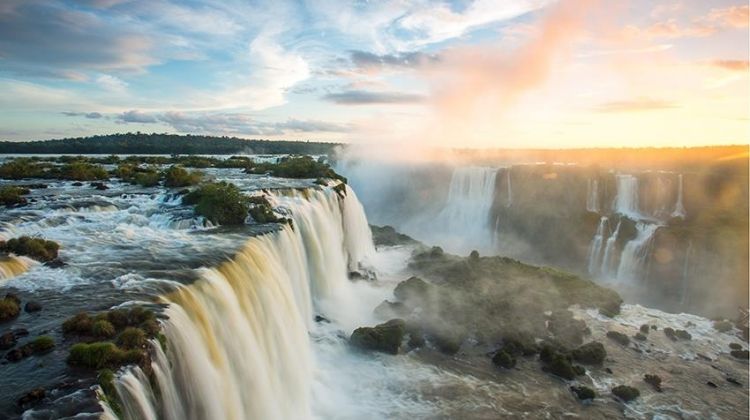 At the point where Brazil, Paraguay, and Argentina meet, the Iguaçu river drops spectacularly in a semicircle of 247 waterfalls that thunder down into the gorge below. Just above the falls, the river is constricted to one-fourth of its usual width, making the force of the water even stronger. Some of the falls are more than 100 meters high and they cover such a broad area that you’ll never see all of them at once, but you do get the broadest panorama from the Brazilian side. Catwalks and a tower give you different perspectives, and one bridge reaches all the way to one of the largest, known as the Garganta do Diabo (Devil’s Throat). You can cross to the Argentinian side for closer views from catwalks that extend farther into the center of the falls. The two sides offer different perspectives and views, so most tourists plan to see both. The falls are protected by the UNESCO-acclaimed Iguaçu National Park, where subtropical rain forests are the home to more than 1,000 species of birds and mammals, including deer, otters, ocelots, and capybaras.

Downtown Rio’s most fashionable and famous section follows Avenida Nossa Senhora de Copacabana and is bordered all along one side by four kilometers of white sand and breaking surf. The beach is separated from the buildings and traffic by a broad promenade paved in black and white mosaic in an undulating pattern reminiscent of streets in Lisbon, Portugal. The beach isn’t just for show. It’s also a popular playground filled with sun-worshipers, swimmers, and kids building sand castles whenever the weather is fine. Stroll the streets here to find restaurants, smart shops, cafés, and beautiful old buildings from the days when Rio was Brazil’s capital. One of these, the famed Copacabana Palace, is protected as a national monument. Inside its lobby, you can easily imagine seeing the royalty and film idols who have stayed here.

About 20 kilometers southeast of Manaus, the dark Rio Negro waters meet the light muddy water of the Rio Solimões, flowing side by side for about six kilometers before mixing as the Amazon. Boat trips from Manaus take you to this point, called Encontro das Aguas, meeting of the waters. Other boat trips take you into the heart of the rain forests and the network of rivers, channels, and lakes formed by the three rivers. In the Rio Negro, the Anavilhanas Islands form an archipelago with lakes, streams, and flooded forests that offer a full cross-section of the Amazonian ecosystem. You can see monkeys, sloths, parrots, toucans, caimans, turtles, and other wildlife on a boat trip here. Also close to Manaus, the 688-hectare Janauari Ecological Park has a number of different ecosystems that you can explore by boat along its narrow waterways. An entire lake here is covered with giant water-lilies found only in the Amazon region. While in Manaus, be sure to see its famous Teatro Amazonas, the Italian Renaissance-style opera house, designed to put Manaus on the map as South America’s great center of culture. 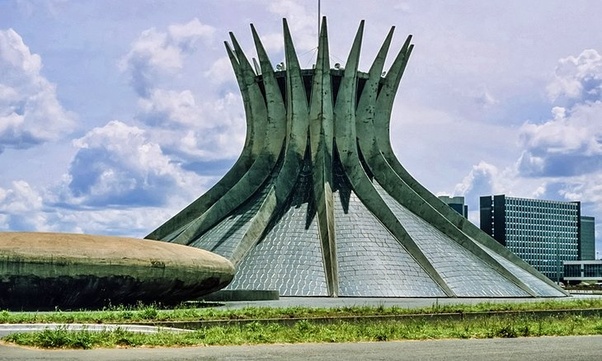 Brazil’s new city of Brasília was carved out of the wilderness and completed in less than three years to replace Rio de Janeiro as the country’s capital in 1960. The ambitious plan by Lúcio Costa and Oscar Niemeyer became a showpiece of city planning and avant-garde architecture, and it remains today as one of the world’s few cities that represent a completed plan and a single architectural concept. Without the normal mix of residential and business districts, the entire governmental section is composed of major architectural highlights, which are the city’s main tourist attractions. Some of the most striking surround Praça dos Tràs Poderes: the presidential palace, supreme court, and the two sharply contrasting congress buildings, plus the Historical Museum of Brasília and the Panteão da Liberdade (Pantheon of Freedom), designed by Oscar Niemeyer. That architect’s best-known building in the city is the circular Catedral Metropolitana Nossa Senhora Aparecida, whose curved concrete columns rise to support a glass roof. Another of Niemeyer’s landmark works is the Palácio dos Arcos, surrounded by beautiful gardens designed by Brazilian landscape architect Roberto Burle Marx, who worked with Niemeyer on several projects throughout Brazil. The round Memorial dos Povos Indígenas (Museum of Indigenous People) is patterned after a traditional Yąnomamö round house. But many consider Niemeyer’s finest work to be the Monumento JK, a memorial to President Juscelino Kubitschek, the founder of Brasilia. Brasilia has been named a UNESCO World Heritage city.
vestabyte

Who eats the leftovers on Bake Off and is the food served cold?

In a post on Mumsnet, she explained how ridiculous she feels about his fear of “sweaty arses” – sparking a debate over wasted loo roll. The woman wrote: “So, after 15 years of marriage I’ve just discovered that darling husband puts tissues on the loo seat before using it. “Now, if it’s a bit grim, […]