Thanks to its compact size, travelling around Ecuador is easy and relatively fast, with few places more than a day’s bus ride from the capital. Unlike the attractions found in larger South American countries such as Brazil, Argentina and Chile, Ecuador’s contrasting regions and highlights are within easy reach of each other, allowing for a more flexible approach to route-planning.

Continue reading to find out more about…

The majority of visitors fly in to Quito, whose glorious colonial centre – a maze of narrow streets and exquisite monasteries and churches – demands at least a couple of days to explore. Its modern new town is packed with hotels, restaurants and services that make it a convenient base for excursions.

2. Otavalo and the northern sierra

Striking north from Quito, the northern sierra’s green valleys are dappled with glistening lakes and crested by volcanic peaks, and the area is famed for its artesanías, centres of native craftwork, leather goods and woodcarving, all within a short bus ride of each other. Of these, Otavalo is undoubtedly one of the best places to go in Ecuador, thanks to its enormous Saturday market – one of the continent’s most renowned – and flourishing weaving industry. The region also offers plenty of scope for walkers and horseriding enthusiasts, who should consider splashing out on a stay in any of several beautifully converted haciendas.

South of Quito, the central sierra is home to the most spectacular of the country’s volcanoes, including the snowcapped cone of Cotopaxi, and Chimborazo, Ecuador’s highest peak at 6268m. Also in this rural region are some of the more exciting markets in the sierra, such as those of the villages of Saquisilí and Zumbahua, and the small town of Guamote. Rewarding off-the-beaten-track destinations include the dazzling crater lake of Laguna Quilotoa, with its remote páramo setting, while more established attractions include the busy little spa town of Baños, framed by soaring green peaks, and the train ride down the Nariz del Diablo (“the Devil’s Nose”) from Riobamba, the most fetching of the central sierra’s cities.

4. Cuenca and the southern sierra

In the southern sierra lies the captivating colonial city of Cuenca, a UNESCO World Heritage Site and a convenient base for visiting Ingapirca – the country’s only major Inca ruins – and Parque Nacional Cajas, a starkly beautiful wilderness. Further south, the charming city of Loja is a jumping-off point for visits to the Parque Nacional Podocarpus, whose humid lower reaches are particularly sumptuous, and the easy-going mountain village of Vilcabamba, a popular gringo hangout.

The Oriente embodies one of Ecuador’s greatest wildernesses, a thick carpet of tropical rainforest unfurling for almost 300km, which was home only to isolated indigenous groups and the odd Christian mission until the discovery of oil here in the late 1960s. Since then, the region’s infrastructure has developed apace, allowing easier access to the Amazonian jungle than any other Andean country. Two of the country’s largest wild areas – the Reserva Faunística Cuyabenoand the Parque Nacional Yasuní– and a number of private reserves protect substantial forest tracts that have so far survived the incursions of the oil industry and colonists. Jungle lodges, many of them a canoe ride down the Río Napo, make for the most comfortable way of experiencing the thrill of this diverse and exciting habitat, but you can’t do better than staying with an indigenous community for a glimpse into the lives of the jungle’s resident peoples; some of the more isolated destinations can be reached only by light aircraft.

6. The northern lowlands and coast

A few hours’ drive northwest of Quito on the way to the coast, a number of private reserves showcase the country’s beautiful cloudforests – otherworldly gardens of gnarled and tangled vegetation, wrapped in mosses and vines, and drenched daily in mist – and provide accommodation and guides for exploring or birdwatching, with some of the best sites on the western slopes of the Andes. The village of Mindo, enveloped in richly forested hills brimming with endemic species, is the birding capital of the country. Continuing westwards, Ecuador’s varied coastline begins at the Colombian border in a profusion of mangrove swamps, protected by the Reserva Ecológica Manglares Cayapas-Mataje and best visited by canoe from San Lorenzo, a down-at-heel town rich in Afro-Ecuadorian culture. The surrounding north coast is best known, however, for its beaches and the boisterous resort at Atacames is one of the most popular, though there are quieter places to enjoy the warm Pacific waters, including Súa, Same, Muisne and Canoa. Among the chief attractions of the southern coast is Parque Nacional Machalilla, with its dry and humid forests, superb beaches and impressive birdlife on its offshore island, Isla de la Plata.

7. Guayaquil and the southern coast 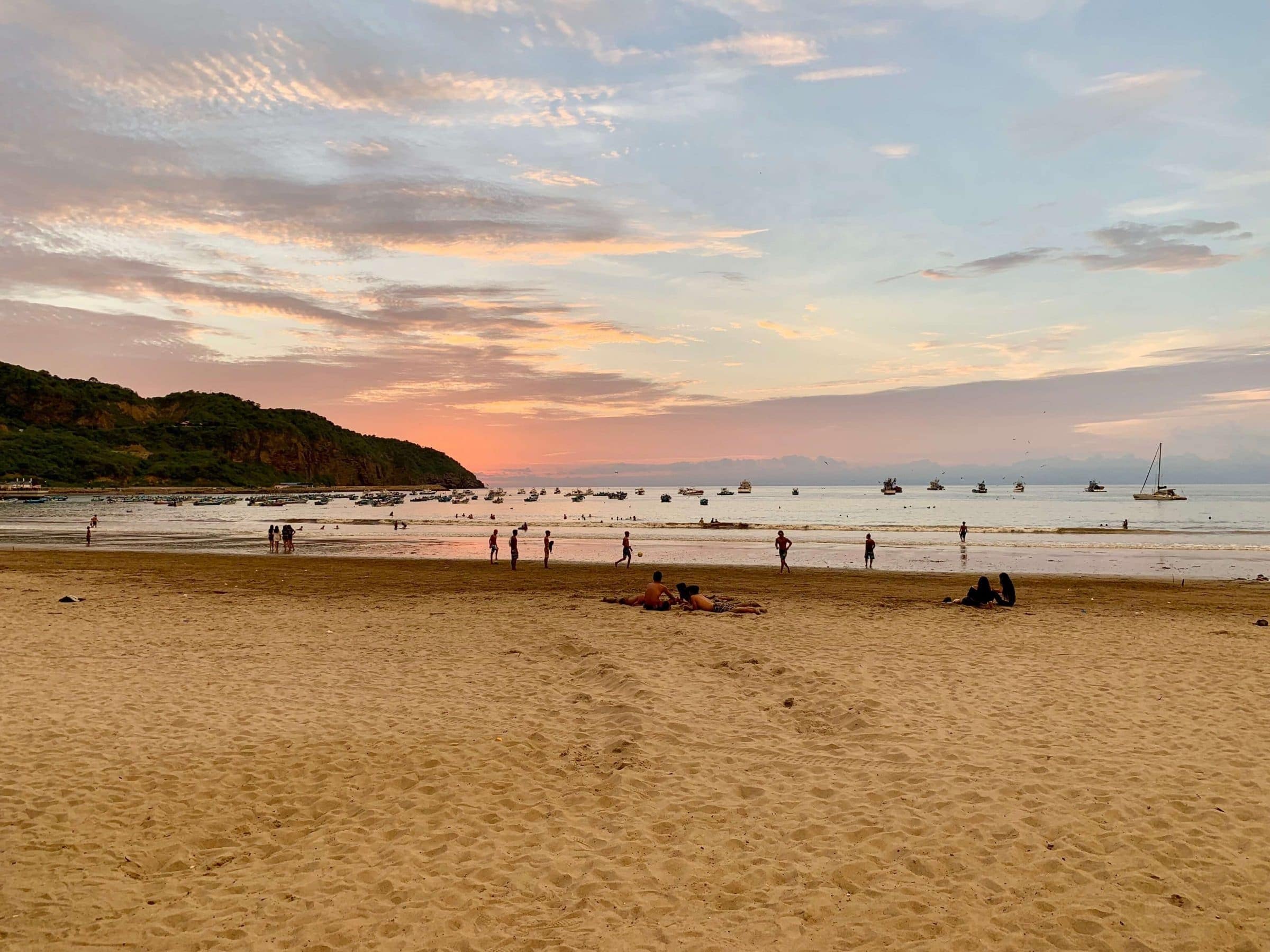 Further down the coast, Montañita is rapidly gaining popularity with surfers and backpackers, while Salinas is perhaps the country’s most prestigious seaside resort. Guayaquil, the region’s main port and the largest city in Ecuador, is a frenetic and humid spot that’s emerging as a tourist destination, while quieter attractions include the mangrove forests of the Reserva-Ecológica Manglares Churute, the warm, picturesque hill village of Zaruma and the petrified forest of Puyango.

Finally, the Galápagos Islands are for many visitors the initial lure to the country, and arguably the most compelling nature spot in the world. Ever since Darwin dropped anchor at these forbidding volcanic islands and unlocked the enigma of their motley creatures, they have enchanted all who come. Beyond gawping at fearless land animals, there are great opportunities to get closer to the archipelago’s abundant marine life: swimming with turtles and sharks, peering through a glass-bottomed boat and looking out for dolphins and whales.

In a post on Mumsnet, she explained how ridiculous she feels about his fear of “sweaty arses” – sparking a debate over wasted loo roll. The woman wrote: “So, after 15 years of marriage I’ve just discovered that darling husband puts tissues on the loo seat before using it. “Now, if it’s a bit grim, […]

But if you’re struggling to come up with a cool and quirky moniker, listen up – because baby names website, Nameberry has revealed that mermaid-themed names are having a huge surge in popularity. It makes sense – after all, mermaid toys, games, clothes and accessories are everywhere at the moment. “Mermaid names have made it […]

The “life-changing revelation” was made online with several fans saying their minds had been blown. The Twitter user uploaded a shot of his marmite jar positioned on its side. He added the caption: “It took me years to realise that near-empty Marmite jars should be kept on their side so you can the last of […]